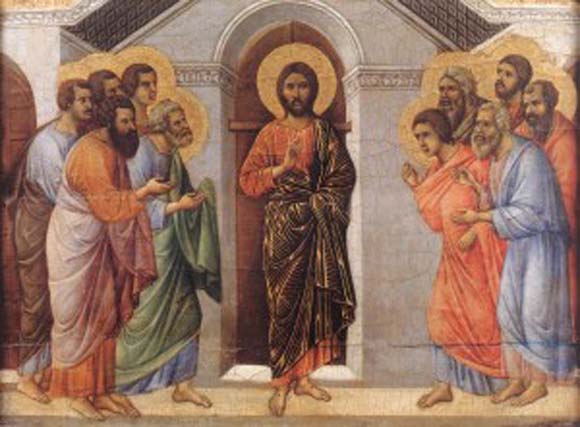 Sermon for the 3rd Sunday of Easter

We’ve been fighting this COVID-19 for over a year, and just as we get the vaccines to keep people healthy, we see the numbers of sick increase and the number of variants grow and new waves of infection spread around the world. The greatest spread here in the U.S. is among our neighbors in Michigan and Pennsylvania—Ohio’s numbers are growing. Too many people not wearing masks and distancing even while the new variants are demonstrating that they are far more contagious and dangerous to younger people.

“Peace be with you.”

There’s another pandemic—a pandemic of gun violence. A graphic in yesterday’s NYT shows the number of mass shootings this year alone from Georgia to California, from Texas to Indianapolis. Many claim that the more guns we have the safer we are. The population of the US is approximately 330 million and the estimated number of guns in America is 434 million. We’ve got 104 million more guns that we have people. This should be the safest place on the planet if more guns were the answer.

“Peace be with you.”

This week we observe Earth Day, number 51. Earth day is the annual reminder of the degradation of our environment and the rapid pace of global climate change. Despite all of the proclamations, the planet is in far worse shape today than it was in 1970.

Peace be with you.

But there is no peace in a nation where there are, on average, three police shootings a day. That is too many. Justified or unjustified, we have got to work together as a people to find better ways to do policing in America.

“Peace be with you,” says the Lord. This was not and is not a proclamation of what is . . . rather, it’s a prophetic call to action for us to create with passion the Divine will of God. It’s not enough to say, “Ain’t it awful,” and then go back to doing whatever it was that we were doing before. The call of the Gospel is a call for repentance and transformation.

For far too many people Christianity is all about getting to heaven.

This kind of thinking is alive and well. One can see it along the freeways. There’s a series of billboards asking, “If you died today, do you know where you would spend eternity?”  And there’s a display of the Ten Commandments as a kind of roadmap to help drivers locate the happy side of eternity.

But there’s another point of view in the Gospels and in subsequent Christian theology that thinks about sin in a very different way. Rather than understanding sin primarily as bad behavior that prevents us from getting to heaven, and rather than understanding the cross as Jesus substituting himself for our sins and paying the wages of sin with his own death—so that we can get to heaven—this other perspective isn’t even primarily about heaven. It’s not about ghostly spirits, wing-ed creatures, or wispy beings in lives and worlds beyond this one. It’s about earth, as you and I know and experience it. The death and resurrection of Jesus happens where the very real body of Christ has been broken — in this world and in this life.

That’s the point of these post-resurrection stories about Jesus having people touch him, walk with him, eat with him. The Gospel writers were affirming that the risen Christ isn’t a ghostly apparition drawing us to an existence in another realm . . . the Christ, rather, is very much a part of this reality, and it’s here that we’re called into mission. It’s not that the afterlife is un-important, but we’ve got plenty to do right here and right now.

Christian theology affirms that Sin with a capital “S” is not so much about bad behavior as it is separation from God. So that’s what Jesus was doing when he came down from heaven and became incarnate among us. He is fully human and fully divine—in himself he brings humanity and God together. The theological term is atonement—at one ment.. No division between us and God. That’s why the writer of I John says, “No one who abides in him sins . . . .” It is not abiding, not being one with God, that is Sin. All bad behaviors are just symptoms of this root cause.

The early Christians talked about the stone rejected by the builders, which became the head of the corner or capstone in an arch. It was a metaphor to speak about Jesus, rejected and despised, whom God raised from the dead and made the center of human existence. In God’s economy, the rejected stones and the injured people are the ones to whom Christ’s broken body is offered.

The Christian life isn’t about escaping this world. It’s about transforming it—making it a residence for the Risen One . . . a residence that exists “on earth as it is in heaven.”

And so we bring our message of God’s love and abiding in Christ to the world. We do that by sharing the message in our families, neighborhoods, places of work. We insist on letting leaders in business, government, and our local communities know about our aspirations for the Peace of God. Write letters, emails, texts, and make phone calls. Pay attention to the issues of the day and subscribe to EPPN, the Episcopal Public Policy Network and join your efforts with theirs.

That’s a signature mission program that comes straight from Jesus.

God bless you. God bless this parish family. And may God’s peace be with us all.

All stories by: johnpaddock
Sermon for 2nd Sunday of Easter
Information about In-Person Sunday Worship