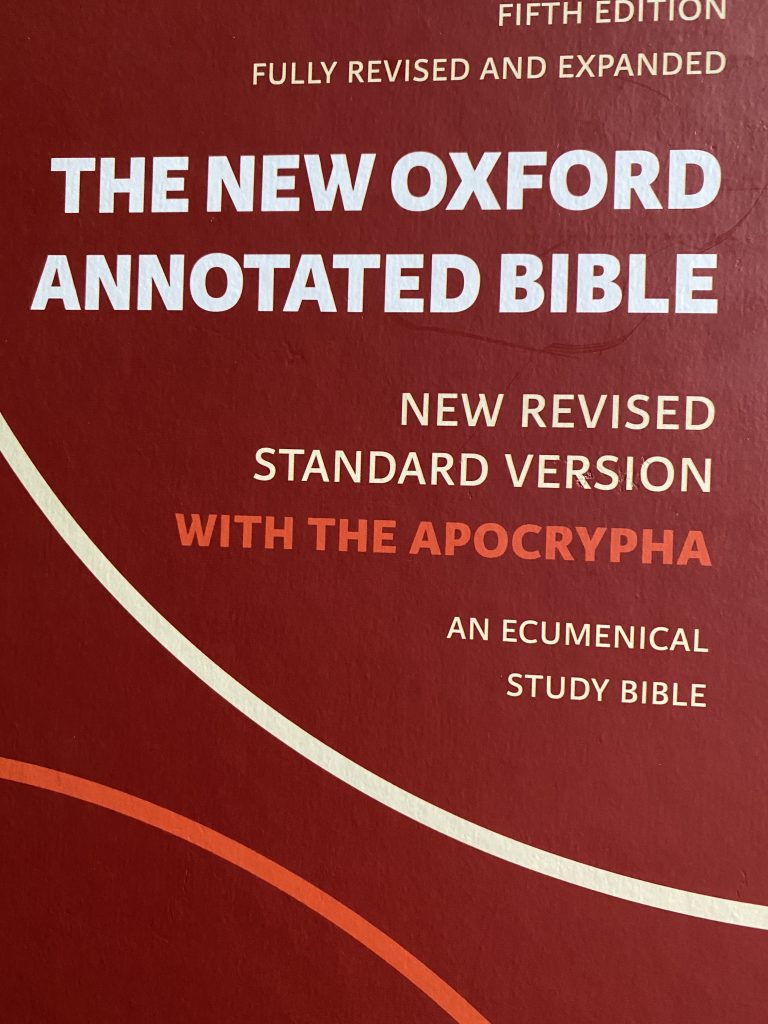 Sometimes our liturgical formulations just don’t seem to fit with some scripture texts.

For example, Psalm 137 ends with this line: “Happy shall be he who takes your little ones, and dashes them against the rock.” And the proper liturgical response immediately follows: “Glory to the Father, and to the Son, and to the Holy Spirit: as it was in the beginning, is now, and ever shall be. Amen.”

“I want you to give me the head of John the Baptist on a platter.” Immediately the king sent a soldier of the guard with orders to bring John’s head. He went and beheaded him in the prison, brought his head on a platter, and gave it to the girl.

And then the Deacon said, “The Gospel of the Lord.” And we all replied, “Praise to you, Lord Christ.”

Not everything in the Bible is Good News or even comforting news. It’s just news. Some news is good; some of it’s bad; and some of it’s just plain grotesque.

So, it seems to me that on some occasions we should instead of saying, “Glory to the Father,” “The Word of the Lord”, or “Praise to you, Lord Christ”, we should have the option of saying nothing . . . silence . . . as we contemplate evil and tragedy.

Since I don’t have any idea about how to bring good news out of John the Baptist’s head on a platter, I’m not going to try. I can’t, as they say, put lipstick on a pig, and have it look like anything other than a pig.

So this seems like a good time to talk about the Bible. What it is. What it is not. How to think about it.

Although we think of the Bible as a single book, one volume that you can hold in your hand, the title in koine Greek, common vernacular Greek that was spoken in the first century, the title is “ta Biblia”—“The books.” So the Bible is actually a library of books divided into three sections that we Episcopalians commonly call the Old Testament (39 books), The Apocrypha (13-19 books depending of which are included), and The New Testament (with its 27 books). Jews and Roman Catholics include the Apocrypha in the Old Testament. But because the Apocrypha was written in what we call the inter-testamental period, between the Testaments—Anglicans have traditionally grouped them in their own section. Many other Protestant groups don’t include the Apocryphal books at all.

But the larger point is that the Bible is a whole library of books that are bound together in one volume. The earliest ones were written around a thousand years before Jesus was born and the latest were penned as late as 120 of the Common Era. They are the work of hundreds of authors and thousands of editors and scribes. The contents include folk tales and ancient myths; wisdom sayings, prose, poetry and songs; histories; prophecies; legal codes; liturgies; worship practices and requirements; gospels, letters, and apocalypses.

Some individual books were written by multiple authors whose works were combined by later editors into a single book. In Genesis, for example, there are two creation stories, one right after the other, and they’re completely different. There are also two different Noah’s Ark stories that are not side by side, but have been interwoven into one by a clever editor. Hebrew scholars can distinguish them line by line, because the two were written hundreds of years apart. It’s like the difference between Elizabethan and modern English.

The Bible was written in three different languages:  Hebrew, Greek, and Aramaic—and unless we can read those ancient languages fluently, we read them all in translation. And as you know, some things get lost or added in translation. There are some Hebrew words that scholars don’t know the meaning of even to this day—depending on the version, there is either a blank or a wild guess.

None of these books were written to be “Holy Scripture.” Each author had a particular point of view, wrote in a particular time in history, and addressed a particular issue, concern, and audience. Some were the equivalent of today’s “paid political announcements”, stressing a highly partisan perspective, while others were written as refutations of the first. St. Paul, for example, never intended to write chapters for the Bible—rather, he wrote letters to the Romans, Ephesians, and the Corinthians, among others, to address contemporary matters and/or disagreements in those communities.

In fact, the first attempt to collect and distribute Paul’s letters was by a heretic named Marcion who, around 140 CE, edited out the parts he didn’t like, in the same way that Thomas Jefferson created a highly edited New Testament, removing the passages that he didn’t care for. The early church didn’t officially put together the New Testament as we have until 382 CE. Prior to that the only “Bible” they had was the Old Testament. And there was quite a debate about which books to include or not. The most highly contested was The Book of Revelation. In fact, no less a light than Martin Luther once commented that “The Book of Revelation is the most un-Christian book in the New Testament.”

What most of the books have in common is that their authors and editors were engaged in wrestling with God and what it meant to be a people of God. Sometimes they were highly complementary of the Divine and at others they complained about God and lamented their fate to him. Some wanted to dash the heads of the children of their enemies against the stones while others wanted to “love their neighbors as themselves.” Some contrasted the evil in the world like the beheading of the Baptist and the crucifixion of Jesus with the Holy Spirit’s call to live into resurrection life.

So it’s all there in the Bible, the good, the bad, and the ugly. Taken as a whole, it’s a vast range of material, gathered over millennia, that’s the record of people attempting to respond faithfully to God and the stories of their failures to do so. As one Rabbi once said, in that sense the Bible is brutally honest . . . a rarity among books of all kinds and especially among religious texts.

Several cautions about the Bible. The first is what we might call bibliolatry—making the Bible into an idol that we then worship as a false God. We honor the Bible for what it is—but we don’t bow down to it. The Bible is never an end in itself but points beyond its pages to the Divine.

A second caution is to understand that this book is inspired in the sense that the human authors were motivated by the Holy Spirit to write of their experiences and insights. But it wasn’t dictated by God. The Bible is not the words of God, but it can and does lead people to worship the One who is The Word of God, the Messiah, the Christ.

A word about interpretation and understanding the Bible. Here are some questions that we should always ask about any particular book or passage.

All this is to say that the Bible is a complicated library. You do not have to have a theological education to read and understand it. But it does pay to have a good Interpreter’s Bible with introductions to each book and extensive commentary. I personally recommend The New Oxford Annotated Bible, New Revised Standard Edition with the Apocrypha, an Ecumenical Study Bible, Fully Revised Fifth Edition, published in 2018. There are many other resources to assist people who want to delve more deeply into the texts, and I’d be pleased to share some of those with anyone interested. But that’s beyond the scope of this sermon.

I hope and pray that these remarks are a helpful summary to the books that form the bedrock of our faith. May God bless you and keep you.

Blessed Lord, who caused all holy Scriptures to be written for our learning: Grant us so to hear them, read, mark, learn, and inwardly digest them, that we may embrace and ever hold fast the blessed hope of everlasting life, which you have given us in our Savior Jesus Christ; who lives and reigns with you and the Holy Spirit, one God, for ever and ever. Amen.

All stories by: johnpaddock
A Matter of Fair Balance
Sermon for August 22, 2021